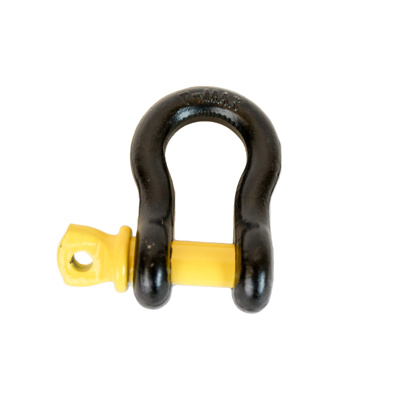 Item No.TM-7329100.8-76
The shackle is an almost essential salvage accessory. A shackle is used to attach rescue straps to vehicles, for example, and tree anchor straps to a rope hook or a pulley. In many vehicles, the towing eyes are so close to the bodywork or bumper, or the towing eyes are so small that the cable hook c
Print preview
Price
Price €8.9€ 8,90
incl. tax
Availability
Description

Shackles come in different sizes and basically in two forms, referred to as D shackles and Omega shackles. The omega shackles are more versatile, especially if you want to hook two strap ends on the closed side.

Very important when using it, the locking bolt of the shackle must never be screwed in as far as it will go. A shackle can easily warp under extreme loads. A bolt that has been fully screwed in can then no longer be opened or can only be opened with the aid of a tool. Therefore first screw in the bolt completely and then open it again about half a turn.

Standard version for use in off-road vehicles.

The maximum working load (WLL, Working Load Limit) of the shackle is 4 tons, the breaking load is at least 20 tons.

The illustration shows the shackle 3/4 on the left and the shackle 1/2 (quad) on the right.